Founded in 2006, Ayyam Gallery is a leading arts organisation, managing the careers of a diverse roster of established and emerging artists from the Middle East. Blue-chip art spaces in Beirut, Dubai, and London, a series of collaborative projects in the United States, Europe, and Asia, and a multinational non-profit arts programme have furthered the gallery’s mandate of expanding the parameters of international art by introducing the dynamic art of the region to a global audience. With its widely respected multi-language publishing division and a custodianship programme that manages the estates of pioneering artists, Ayyam Gallery has also spearheaded recent efforts to document the region’s art history.

Jane and Louise Wilson: ‘A sense of threshold is compelling for us’ – video interview
20 April 2015

Jane and Louise Wilson: ‘A sense of threshold is compelling for us’ – video interview | Art and design | The Guardian.

Oh boy. I highly recommend everyone does their research on Hillary Clinton. Don’t give her your vote just because she is a woman. Consider what she has done and what she will do for the United States. She shouldn’t be voted president just because we finally want a woman in the white house. Make sure you are aware of what she stands for and what she has been willing to do in the past. We have placed her on a pedestal as pro-feminism, pro-lgbt, pro-progress, but people need to understand that this is how politics work. As millennials, we are changing and becoming more open minded. We are the target group that need to be encouraged to vote for her. Now I am not saying to not vote for her, and instead vote for a republican who will destroy any progress made. But be wary of who you are choosing to vote for.

hillary clinton won a plea bargain while defending a child rapist who she knew to be guilty. part of her defense was that the 12 year old girl “sought older men” and was “emotionally unstable”. she was recorded laughing & making jokes about it, and when the tapes surfaced to the media years later, she said she was just doing what she had to do to the best of her ability.

All issues of wealth, power, and violence are also women’s and LGBT rights issues. For instance, neoliberal economic policies of austerity and privatization disproportionately hurt women and LGBT individuals, who are often the lowest paid and the first workers to be fired, the most likely to bear the burdens of family maintenance, and the most affected by the involuntary migration, domestic violence, homelessness, and mental illness that are intensified by poverty.

Clinton’s record on such issues is hardly encouraging. Her decades of service on corporate boards and in major policy roles as first lady, senator, and secretary of state give a clear indication of where she stands.

Speculative poetics connects the language-based poststructuralist philosophy of recent decades with the contemporary interest in ontology. Speculative thought (be it Hegel’s, Benjamin’s, or, more recently, Quentin Meillassoux’s) calls for a self-determination in its practice of language. In this sense, linguistic and philosophical approaches to language ontology are interested in poiesis, which provide an ontological reinterpretation of the correlationist myth of the world’s creation by language: language changes the world.

Hito Steyerl speaks at SAAS-FEE Summer School the year. I will be attending.

~Jean Baudrillard~  (Translated by Francois Debrix)  Today’s terrorism is not the product of a traditional history of  anarchism, nihilism, or fanaticism. It is instead the contemporary  partner of globalization. To identify its main features, it is  necessary to perform a brief genealogy of globalization, particularly  of its relationship to the singular and the universal.  The analogy between the terms “global”[2] and “universal” is  misleading. Universalization has to do with human rights, liberty,  culture, and democracy. By contrast, globalization is about  technology, the market, tourism, and information. Globalization  appears to be irreversible whereas universalization is likely to be  on its way out. At least, it appears to be retreating as a value  system which developed in the context of Western modernity and was  unmatched by any other culture. Any culture that becomes universal  loses its singularity and dies. That’s what happened to all those  cultures we destroyed by forcefully assimilating them. But it is also  true of our own culture, despite its claim of being universally  valid. The only difference is that other cultures died because of  their singularity, which is a beautiful death. We are dying because  we are losing our own singularity and exterminating all our values.  And this is a much more ugly death. 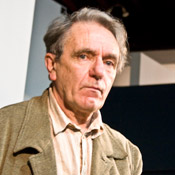 One of the most stimulating thinkers of our time, Jacques Rancière possesses a restless intelligence. The French philosopher has written over 20 books since the mid ’70s — including Reading Capital (1968) with Louis Althusser — and has lectured widely at universities and more recently, at art events including the Frieze Art Fair and the Moscow Biennale. The lecture is part of a series of Idea Studios programs, generating from the College’s innovative Ford Institute of Visual Education (FIVE). Idea Studios engages leading thinkers and artists from a range of fields and practices to enrich the mix of ideas within the College and its broader community by introducing new elements, questions, possibilities and challenges to the prevailing curriculum.

“Who is Farocki?” was the now famous heading that Cahiers du cinéma used in what was probably the very first essay about Farocki in 1975. That is a long while ago, and it confirms that ‘Harun Farocki’ has been around for a long while: already by 1975 he had been making films for a decade. The first time I wrote about Farocki was in 1983, the first time I introduced him to a live audience was in 1993, by which time I could with some justification call him “Germany’s best-known unknown filmmaker”. A year later, Farocki had his first major retrospective in the United States, following several festival screenings of his Images of the World and Inscription of War (1988). more
Jordon Wolfson – female figure robot
3 March 2015

Go to his site at : davidzwirner.com/artists/jordan-wolfson